When this whole thing came about, I knew I didn’t want ‘traditional’ looking scarecrows. I wanted scarecrows that, whilst, still looking like scarecrows, came across as fairly unique. 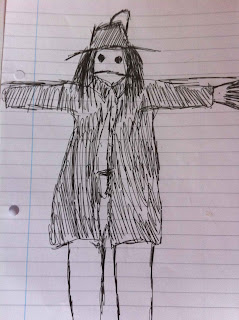 I sketched up quite a few. Some looked more normal, some weren’t scarecrows in any sense of the word. What we’ve ended up with is a mix of some of the original sketches and some new ideas that really only happened once we started physically putting the scarecrows together. 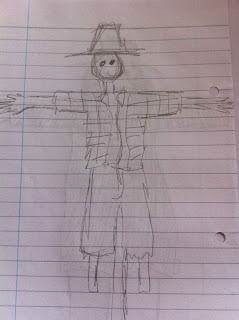 There’s four in the script and I really wanted each of them to be unique, you’ll be able to tell them apart and maybe even have a favourite! They’re all going to be named because to me, they’re characters in the film and as such, deserve names. They haven’t been decided yet though. 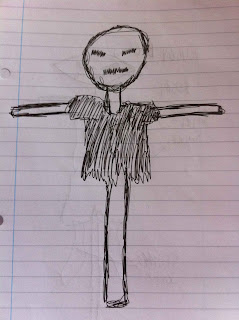 I think all in, the scarecrows cost £50 in total to make. They’re made from two sticks of bamboo, forming the classic cross shape. Our scarecrows, they aren’t tied to the wood – the frame is their skeleton. I bought about four bags of clothes from FARA – not much thought was put into the choice of clothes either. The way I’ve always approached these scarecrows is that they’re homemade. Someone somewhere has been building these things and they’re going to put them together with what they’ve got. And I’m sure whoever really does build scarecrows doesn’t think too much about them beyond their resemblance to the human form. 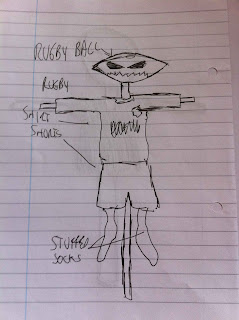 The bags of clothes cost £30 and then it was just about making their faces different – each of them has a unique head and again, save one for one, they aren’t terribly typical. 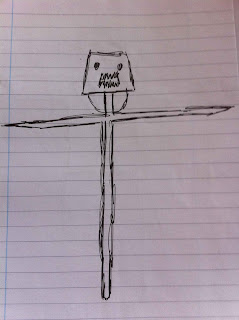 And believe me, scarecrows look like they should be a lot easier to build than they actually are! This is our first fully built scAIRcrow: 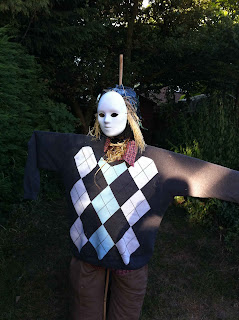 One down, three to go! Hopefully after this weekend there should be some new pictures.