I'm taking a break from talking about production because we're neck deep in casting and I'd rather talk about that process once we've finished it but it's been great. This being my first non student production, it's a brilliant thing to have your work taken seriously and listening to people simply elevate it. Logistically though, it's been a nightmare, organising dates and times etc but, as with this entire thing, it's a learning experience and I already know how I could make things so much easier the next time around (though I'm definitely not thinking 'next time' at this very moment!).

So anyway, I'm calling this blog 'Inspirations' but I don't want to give the impression that I'm just name checking a bunch of films I've ripped off. I would hope that people don't see too much of the following films in scAIRcrows but they are definitely films that pushed me in this direction. 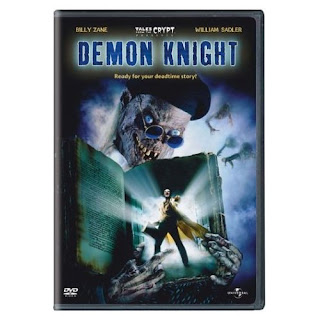 Firstly, Tales From The Crypt: Demon Knight. I've loved this film ever since it came out and have watched it more times than anything else listed here. It's hard to say what I really like about this - it really just comes down to the fact that it's just a fun film. That's all I ever want from a film - to not get bored. And with this, the characters are all so quirky that the film keeps moving even if nothing particularly interesting is happening at the time. But it rarely does slow down and it's the one thing that I wanted to bring to scAIRcrows - a pace that means you're not more than a couple of minutes away from the next action sequence. scAIRcrows has it's character moments (more on that in a second) but it still moves. And the casting is too good - Billy Zane and William Sadler as opposing forces - whilst I still think it would be good with other actors, the cast really do raise the script up a level. 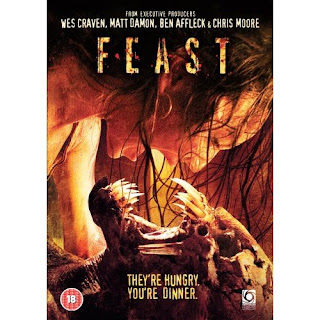 Feast is pretty much the same film as Demon Knight - again, there's a pace to this film that masks over some of the lesser aspects. I don't like this as much as Demon Knight as I don't think the cast and the characters are anywhere near as interesting which means Feast relies more on the action than Demon Knight does. But I still think it's great and again, you won't be bored watching this which is definitely the mission statement for scAIRcrows. If your mind wanders for even a second, I'll feel like I failed.
Right, so, moving on from the action/pace aspect of scAIRcrows, the following two films have a really nice set of characters and atmosphere that I'd like to capture in scAIRcrows. 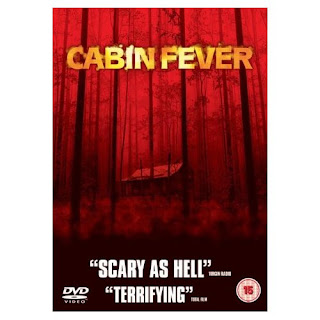 Cabin Fever is a good film to mention here as it's tonally a bit 'off'. You have the serious side of things contrasted with some quite silly and OTT situations that should be jarring but somehow aren't. scAIRcrows has the same sort of tone I think where the film is fairly straight whenever we're with the leads but then deviates slightly when we move over to our secondary characters.
But scAIRcrows isn't really anything like Cabin Fever, though hopefully it shares a similar sense of doom as far as our leads go.
I really love the scene with Rider Strong and Jordan Ladd on the raft - it plays really innocently and you get a sense of history between these two characters but at the same time, you feel sorry for them because you just know it isn't going to end well. It's really great because bubbling under the surface is this great feeling of dread - I think the score in this instance really helps inject that. 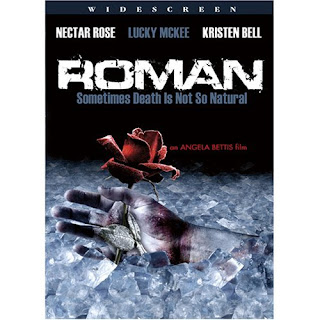 Roman is a really slow burning character film. Really slow. It isn't even that nice to look at but something about it just works. I think again, between the acting and the writing, this is something that just sounds like it should be terrible but isn't because it has the right people behind it.
Like Cabin Fever, there's this feeling of hopelessness running throughout the entire film. As strangely likeable as Roman might be, he is capable of bad things and when he meets someone with a similar outlook on life to him - well, it's doomed before it's even started. 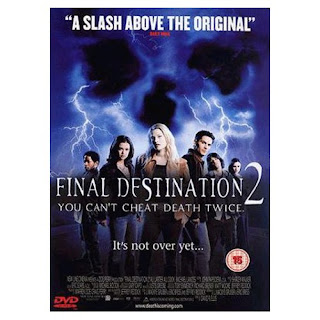 And the last film I mention here is Final Destination 2. One of the characters in the film shares a very similar death to the guy that's impaled by the ladder. I just thought that particular way of killing someone is very easy for a scarecrow to deliver (they're typically fixed to large wooden posts that could do some damage if brought down on someone's face) so I had to include it.
What the Final Destination films also share with scAIRcrows is inventive death scenes. I'd watched pretty much every scarecrow film possible AFTER I'd written the script for scAIRcrows and I didn't feel like any of them really capitalised on the fact that they had scarecrows as their killers. I wanted the deaths in scAIRcrows to be something that was relevant to scarecrows or they might as well be anything/anyone. So there's the straw death previously discussed, a crucifix death and the post through the eye death as just mentioned as well as others.
Being a full on horror fan, there's probably millions of other films that've influenced me and scAIRcrows in some way but those are the ones that really stand out as being guiding forces in writing the script.
The next blog will probably go back to the production itself - we've gone back and tested a few other things here and there. Some things look really cool for what they are and I genuinely think, if we keep at this level, we could end up with something we're actually quite proud of. Tomorrow will be the first day in a few weeks where I take a complete break from the film before diving back into auditions for our final lead on Sunday.
'Til next time...
Posted by scAIRcrows at 22:03