Yesterday (Sunday) we finished auditions for scAIRcrows. From the first weekend we'd cast three of the four leads but needed to go back and cast the remaining fourth character. It was looking slightly tricky as we've pretty much locked our first shoot weekend - everyone involved has set that weekend aside so despite being awfully close to the date, we had to knuckle on and find an actor in time.

By Friday we're sure we'll have confirmed an actor and then we're all set for the first weekend's shoot.

scAIRcrows was initially going to be a more 'friends and family' type thing and it'd been discussed in that manner. The only thing that happened was that I then went and wrote the script. And the second it was finished it became abundantly clear that it needed 'proper' actors. I'd written myself into a corner. The thing was, the script needed to be what it was. It needed to have halfway decent characters and a certain amount of dialogue to give the audience some connection.

The whole thing very nearly died there and then. I weren't confident enough to bring in people who were professional actors - I didn't feel like I could deliver something that was worthy of professional actors. But by that point, the film had been talked up so much that it had to go ahead so I put the ad out not really knowing what to expect. I'll post the ad in it's entirety as a separate blog as it seemed to go down well - it got across the fun of the project.

And we got an unprecedented response. Whilst I didn't really know what to expect, I certainly didn't expect to get over 100 applications.

We slowly whittled it down (which was very tough and time consuming). We decided we wouldn't do in person auditions for what I call the fodder roles (the characters that are in the film just to die) as they only speak a few lines and so we opened up video auditions to them.

For the leads, we did in person auditions. It was really good to see people understanding the script, liking it and also interpreting it in their own way. Some people absolutely nailed the lines and others went beyond that, seeing things that I hadn't written in the script but were so right for the character. Everyone brought something and I am so appreciative of everyone that showed up - it's really encouraging to see other people share an interest in something that started out as a joke but became very serious.

I just wanted to give an idea of the sort've low budget/independent world that scAIRcrows inhabits. We held auditions in a music rehearsal studio. The website for the studio is www.archstudios.co.uk - I highly recommend this place. The people there are great and it's a nice environment, easily accessible by tube and cheap. This would definitely be my go to place for any future projects - really can't imagine many other places being more suitable.

So on Sunday, we got there and unpacked. I'd forgotten the plate for the tripod as seen: 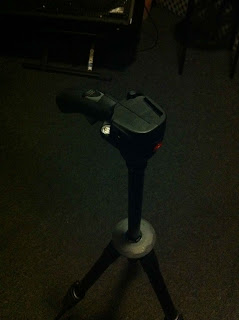 So, we improvised and rested the camera on a drum - typical low budget creativity at work there... 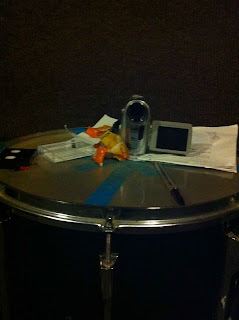 Then, we had camping chairs as seats: 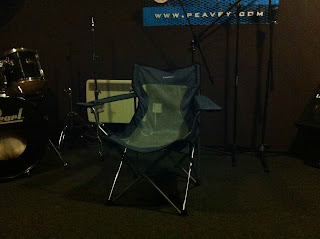 The actors coming in were given the dearest one (when I first bought them in Argos, I wanted five chairs but they only had four of the cheapest ones so I had to buy the next level up - I hope the actors all appreciated the extra level of comfort!).

And these were our chairs. Funny thing was - the first day of auditioning, I had three other people sit in with me (as I wanted a rounded opinion). On the second day it dropped to two and on the third, there was just one other person with me. Which is why I won't do any more auditions for scAIRcrows as there's a definite trend there! 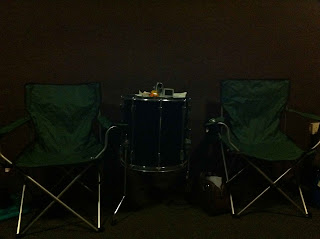 But, despite how it all looks, it worked - I researched proper casting studios and we managed to get three full days of auditioning in for less than the average price of one day in an actual casting studio. And hopefully none of the actors were put off by the camping chairs and drums doubling as tripods.
In the next couple of days we should have the last of the mundane details sorted and then there's about a week and a half of planning shots ahead of the first weekend's shoot.
Posted by scAIRcrows at 22:03