Realise that there hasn't been a new blog in a while - something I will try and fix from now on. After coming off the shoot, there was about a week before team scAIRcrows disappeared for a week.

We're all back now and ready to crack on with the production.

So, where are we?

Firstly, I made a few Twitter/Facebook posts about editing beginning. It then went from editing to just cataloguing and then the aforementioned break happened. Editing hasn't really gotten any further along simply because there's a lot of footage and trying to organise it all and then the sound too (as it was recorded seperately to the video) turned into a much bigger job than first anticipated.

We've decided to break it down into chunks with the current mission being, to start each new week viewing all the footage for a particular scene, choosing the shots to make the edit and then ending the week with a rough cut of that scene. That rough cut will need to be sound mixed, graded and scored so it'll be far from finished but we knew going in that this would take a while in post but then I guess no-one shoots a film and has the finished product a fortnight later!

So we're starting with scene 2 which probably means nothing to anyone that hasn't read the script but it's the first scene in the sequence of the script that we shot. It is three pages and a couple of lines long - this should roughly equal 3 mins of finished film (video for the pedantic). We have an hour and five mins to go through. I don't know if that's excessively long or not but to me - knowing that one hour and two mins of that is going to be binned makes finding the right 3 mins quite a pressured job. Basically, we only want 4.5% of what we shot for that scene. But on the flipside, realistically, an hour or so isn't too much time to spend watching something.

We watch that tomorrow and then I'll beging putting it together based on those takes with the view of having that finished in a rough form by next Sunday. Though, we do have a shoot day on the Saturday so that may delay us slightly.

So yes, the next day of shooting takes place on Saturday, when we start filling in the gaps of the script. I may have mentioned this before but we have the core of the film with the leads (which is shot) but we sandwich those scenes with death scenes of other people in the vicnity. It's my way of keeping the film moving and means, at any point in the film, you're no further than 3 mins away from the next gory death scene(s). Two scenes will be shot that day and scAIRcrows will be that much closer to being finished. Then there's just three more scenes to shoot and scAIRcrows will be done! I'm realistic enough to know that's a ways off (in terms of work, not time). But I'm back in that mindset now having taken a break and looking forward to moving on with the production. It's just the one day this time too so shouldn't be too draining - that first shoot was a killer.

One really funny that's happened to us that I should be crying over was discovered today. In shooting with the leads previously, there were certain shots that we knew, for time, we could come back and get later. That was the plan. Today, we just happened to be walking by and thought we'd just check in on it (no plan to shoot the additional bits just yet). The entire field has been cut. There was waist high grass at the location as can be seen on flickr/Facebook and below. Now, there's nothing. And unfortunately for us, we needed some shots to take place within that grass and with it in the background. So I believe we collectively said 'shit' and then laughed about it. There's nothing we can do after all.

This is the view we had from our tree the weekend of the shoot: 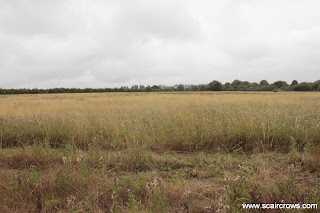 This is the view now: 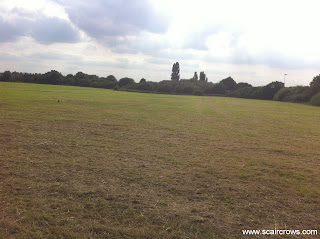 We were under the tree in this picture - look at the background. 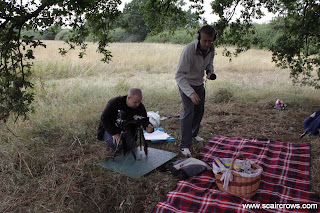 And this is what it looked like from under the tree today: 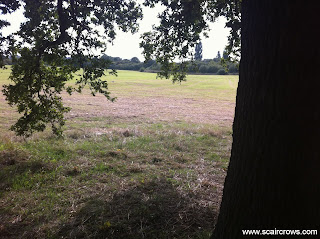 That's the tree in the background - all the grass is gone. 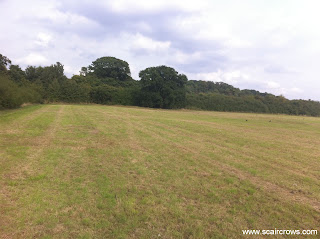 Also, I like that things can go wrong. I can't compare this to Jaws and the mechanical shark not working but it's good to have stories about the production. If there was nothing to say except that everything went perfectly, yeah that's the ideal situation but it's boring.
No, having obstacles and working around them is a good thing. Whether I'll be saying this when we actually come to shoot it is a different matter but I do want the challenge.
Tomorrow we just plan Saturday's shoot - hoping it should be fairly straight forward as they're two, small, self contained scenes but the last shoot showed me that I shouldn't assume anything! But I have learnt from any mistakes I did make and that almost makes the mistakes worthwhile!
It's my intention to post some crude storyboards tomorrow (no spoilers) and the next blog won't take as long to go up as this did!
In the meantime, http://www.scaircrows.com/ is sort've doing something now. It's an easy way to access all the content I post in one place - there's also the option of following scAIRcrows on Twitter or adding us on Facebook to ensure you're current with the content - I'm trying to keep this updated as much as I can, content permitting. I will build on the webpage in time, to turn into more of a site with a synopsis page, possibly cast page etc. But obviously, need to keep the film itself the number one priority.
Until next time, eyes on the skies!
Posted by scAIRcrows at 19:39