I may have touched on this before but my favourite ever film is Brain Damage, a film written and directed by Frank Henenlotter. I can remember exactly when I first came across this film. It was in the summer holidays of 2001, really late at night and I was just flicking through all the channels on Sky as I did most nights, never really finding anything of interest. And as I flicked across the channels, this film was starting (I watch no TV these days but when I did, if something had already started, I wouldn't watch it). It was on the Sc-Fi channel (I don't know about now but it used to be a very good source of 80s horror despite being called Sci-Fi) and I was just drawn in straight away.

I immediately ordered it (it only had a UK DVD release in recent years and I have no idea about the quality of the release) and watched it millions of times.

It was/is a film that truly spoke to me. It told me that films don't have to play by convention but also don't need to take that ideal to the extreme. And that's the thing that permeates all Frank's films and the one thing that's informed scAIRcrows and no doubt anything else I ever make. He creates worlds and characters that are 100% real but then throws in some sort of off kilter aspect. Brain Damage is a very hard hitting film about drug addiction - there's a very tough segment of the film involving the lead trying (and failing) to rid himself of this addiction. It is played deadly serious and you can feel it. At the same time, it is a film where the other lead is a talking slug/worm thing. It sounds completely stupid but because everything else around the worm (and the worm itself) is played straight, you accept this thing as a reality.

scAIRcrows definitely follows this line of thought. We have a bunch of real people with real concerns and lives that are simply playing out. And then flying scarecrows appear. I will happily admit that scAIRcrows is a much less intelligent film but I'm not trying to remake or even copy Brain Damage. I cite Henenlotter and Brain Damage as an inspiration but they're only such because they agree with something that was already within me. They said to me that there's other people that see things just slightly off reality. They match the way that I think. 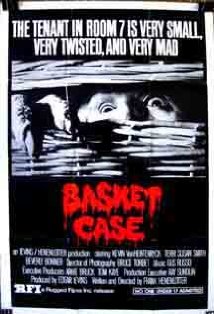 Basket Case is Frank's first film and I'm guessing the one he probably loves and hates in equal doses. Loves because it got him noticed, hates because instead of giving him money to make original projects, producers just wanted more sequels to this.

It's about Siamese twins who are separated. One brother is little more than a head and two arms attached to the torso of the other brother. Upon separation, the deformed brother (Belial) is thrown away but surprisingly, isn't dead. It picks up a few years later when both brothers head to Manhattan and seek out those doctors involved in the operation with Belial exacting revenge in a savage manner.

It clearly has the sensibilities that all of Henenlotter's films share but this one takes itself more seriously than the rest and, as much as it can be, is the most conventional of Henenlotter's films. It's a brilliant film that you can tell was crafted with a true love - it feels like a truly independent film but in a good way.

Henenlotter followed up Basket Case 6 years later with Brain Damage. Unfortunately the cover there gives away the very last shot of the film which isn't particularly clever. I have a French poster for this film (signed by Henenlotter when he attended Frightfest 2008 with Bad Biology) which is a similar image but is much cooler as it also features the worm, Aylmer, and a brain with a cocktail cherry and a straw sticking out of it.

I've probably said as much as I should say about this film. I totally worship this film and something very special would have to come along to knock it off my top spot. Check it out, it's available on UK DVD (as I believe all of his films are now). 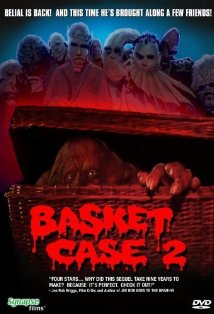 Basket Case 2 was a film that was made purely so that the film Henenlotter really wanted to make (Frankenhooker) could be funded. He entered into a deal with a company that enabled him to make Frankenhooker if he delivered a Basket Case sequel first (that's an important thing to remember).

He never wanted to make this film and the cynics may call him a hack for making these sequels but his intentions for making them were honorable but more importantly, he didn't hash these films out. With Basket Case, Henenlotter had made a film with a certain tone and a definitive, inevitable ending. You could imagine how easily it could have been to cook up a sequel if forced. But Henenlotter actually gave it some thought and approached it with a tone that was far removed from the first and creating a world which is hard to imagine co-existing in the same timeline that the original happened.

Basically, Belial and his brother Duane are kidnapped from the hospital and taken to their aunt's (Granny Ruth) mansion where they discover she is caring for numerous deformed people - all exaggerated to comical degree. It turns the story of the original upside down (where Belial was the odd brother, Duane is now the one that doesn't fit in). There is a plot line of reporters tracking down Belial and Duane after the events of part one but this is secondary to the conflicts occurring between the brothers in Granny Ruth's mansion. The characters have little similarity between the two films but again, it just speaks of Henenlotter trying to make something of a situation that wasn't ideal. 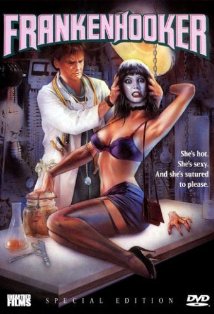 ﻿Frankenhooker was﻿ the film that Henenlotter made Basket Case 2 to produce. I'd say that this and Basket Case 3 are more comedy than anything else. It's a lot more tongue in cheek and the furthest Henenlotter got in tone to Brain Damage. It tells the story of a man whose girlfriend/fiance is accidentally killed by a lawnmower. Said man also happens to be an underground scientist (with a brain for a pet and feeling a constant need to drill holes in his head to help him overcome problems). He decides that he will bring her back to life but doesn't have enough parts after the lawnmower incident. So he develops a drug he calls Supercrack, distributes it to prostitutes who consequently explode upon taking this drug. He then goes around, collecting the parts and reconstructs his girlfriend. The only side effect is that she resurrects with the memories of these hookers and heads straight to their haunts looking for business.
It is every bit as good as it sounds. You could clearly see that Henenlotter was not content doing the same thing over and over and it's a shame his career effectively ended after this film. 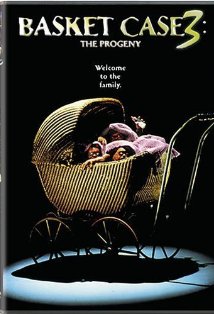 So, Basket Case 3 followed Frankenhooker. This, like Basket Case 2, was made as part of a two film deal. If Henenlotter made this, he would get to shoot the film he actually wanted to do. Only this time around, the company supposedly had no money left over to make his original film. So he basically dropped out of the business. Fed up with being asked to just make more sequels to Basket Case he went on to be a curator of old cult films, working with Something Weird (they're a bigger company in the US, they've released some films in the UK but they're very basic versions of their US releases).

Basket Case 3 is a more straightforward sequel to Basket Case 2 than 2 was to 1. Only just though. It continues the story of 2 and takes a lot of the silliness that's in Frankenhooker. It does deal with some real world themes though, culminating in what I think is an amazingly messed up ending where the 'freaks' led by Granny Ruth finally rise up against the world that shuns them. I think it was clear that Henenlotter really didn't want to make any more of these films and so ended it in such a way that any continuation would have been so far removed from the original film that no-one would even recognise it. I think that's where he was slowly taking the Basket Case series in part 2 - delivering films that fans of the original probably wouldn't really appreciate. 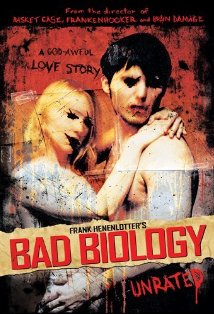 We then skip forward sixteen years when Henenlotter came out of a self imposed retirement to co-write and direct Bad Biology. There's been a few false starts as far as new Henenlotter films go. A film, Sick In The Head, was announced in partnership just a couple of years before Bad Biology that seemed to just fizzle out. There's been many other titles that Henenlotter has discussed that get mentioned and never appear again. This time, a rap star in the US, R A The Rugged Man, put money up for Henenlotter to direct this film that he would co-write with R A. R A seems to be a massive fan of Henenlotter's, one with enough money to enable Henenlotter to make whatever the hell he wanted with absolutely no interference.

As the tag line says, A God Awful Love Story. It's about two people with glaring sexual abnormalities who eventually meet, producing the strangest looking baby you'll ever see. This film feels like it could've followed Brain Damage, the silliness of the later films is mostly dropped but still lacking the harder edge of his first two films. It was amazing to see Henenlotter return so effortlessly after so many years but slightly marred for me in that a few years prior to this being made, I'd written a feature script that now seems fairly similar (that observation has been made by someone else too). Not in content but in theme and it's something I've wanted to make one day but would just feel like I was aping this film (despite the fact that it'd been written before Bad Biology was at least announced).

And as of now, that's all that he's made. I'm unsure as to whether we'll ever see another film from him, despite claims to the contrary. But I think that after making a film 16 years after his last one, he's proven to be a wild card and the next one may just appear out of the blue one day.

So, as far as influential directors go - Henenlotter is the one director I admire above all else and the one that made me realise that films like the ones I would like to make are out there, so why not give it a shot. I should also note that each of these films he has written or co-written.

* One very general comment about all of these blogs - I don't reread them. I spell check but that's it. So if there's weird instances where words appear where they shouldn't and sentences run on, I apologise. I could spend all my time making each sentence sparkle but then I would never get any of these out there and to me, it's more important that I get the content out there than how it is presented!
Posted by scAIRcrows at 11:01