What Happens Next Could Go Horribly Wrong...

Right, so we wrapped nearly a week ago. Consequently, there isn't anything left to do production wise at the moment. Once we have an edit together, we'll know what effects shots etc we need to get to insert and finally put this film to bed.
But to get to that point, we need a picture edit. Throughout the last two months, you've heard me pipe up about having this or that cut. We're up to 6 minutes of rough cut footage, some of the cast have been lucky (?) enough to see some of this footage but to everyone that has seen it, I've stressed that it is rough cut and it truly is. Some shots last too long, some are too short, some jump (we do have coverage for these jumps, just haven't incorporated them yet). The reason we've been sat with this rough cut footage, knowing there's stuff wrong with it, is that we simply haven't had the time to go back and tweak it all. Now that production's finished, getting a picture cut is now the sole concern.
To that end, I've had to invest in some editing software. I previously owned Pinnacle Studio - I've used Pinnacle to cut all the YouTube videos. I like Pinnacle, it's simple and I know my way around it - I can get what I want out of it (within limit, it's not incredibly powerful) fairly quickly and pain free. I also use it to create the rushes DVDs that we use to build edit lists for each scene.
However, I knew that what we were doing here needed something powerful, something that could give the film a professional look or as close as... For me, the only option really was Adobe Premiere. I've touched this program before and I know how incredibly complex it is so I thought that I could break myself in by buying Adobe Premiere Elements first. Elements to me, seems a lot more serious than Pinnacle - it looks 'proper' and you do get the feeling that your video would go a lot further on Elements. However, it's just not as easy to use and there's a bunch of things that are fiddly beyond reason. I've struggled on with it though because I know that's nothing to what Premiere is. All the rough cut footage is cut on Elements.
Now that we've finished shooting (and the budget got a refresh) I decided to just jump into it and buy the Adobe CS5 Production suite. I know within this package is everything I could possibly need to get scAIRcrows looking the absolute best it can. However, I know that it's also going to take forever and a day to learn how to use! I've bought the first training book and will begin battling through that this weekend.
But more importantly, and this is where the title of the blog comes into it, I'm upgrading the hardware too so that the program runs as smoothly as it can because it does stutter at the moment. I'm not massively 'techie' but I know what I need to know - this is basically what I'm doing to the computer this Saturday:
2GB of RAM is the minimum that Adobe needs to run - I have 4GB (the recommended amount) so I'm above spec already but I'm adding another 4GB to bring the computer to 8GB. 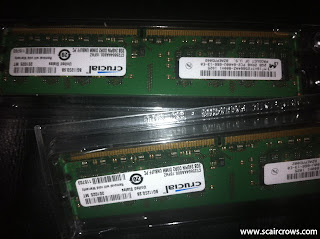 A graphics card with 256MB VRAM as minimum is required to run. I have 512MB but am replacing it with a 1GB model. 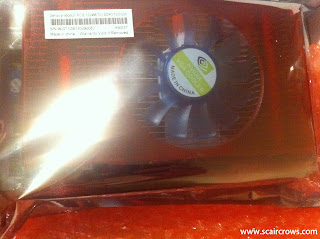 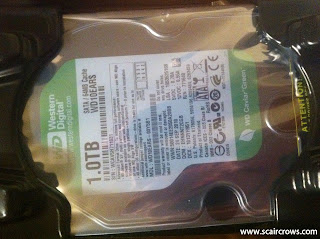 And here's the toolkit I bought to do it all. Again, I don't massively know what I'm doing, I don't know all that much about computers - I knew I needed this stuff by buying a few computer magazines and reading a few websites. 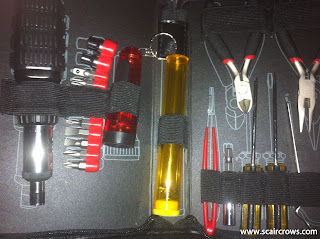 So, if I get it wrong, scAIRcrows could be offline from Saturday onwards! That is actually a possibility too. I'd say it's about 30% likely to happen but it's still something that could happen. But, if I get it all in there and working, the editing will hopefully be a very smooth process.
As long as I learn how to use the software! Anyways, so that's what's happening with scAIRcrows this weekend - a major hardware overhaul to facilitate the editing process - once we get this going, we should hopefully start burning through the editing. The good thing is, there's nothing in the way now but myself so we're getting that much closer to the film seeing the light of day!
Posted by scAIRcrows at 23:51